“Rebecca” and “Going Attractions: The Definitive Story of the Movie Palace” 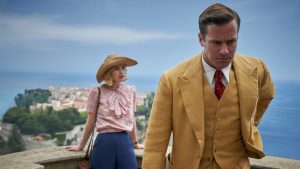 Director Ben Wheatley takes us to the English coastal countryside in 1938. A new wife is attempting to oversee Manderley Estate. Hmm…that’s not going very well.

The film is a remake of Alfred Hitchcock’s gothic 1940 Academy Award Best Picture, and it doesn’t matter if you know about that version to see the script flaws in this new version glaringly. Both are based on the same source material, Daphne Du Maurier’s famous 1938 novel. Yet, the repeated frustrations and bullying of Lily James’s character are creepy and frankly categorically boring. The brooding snob, Armie Hammer, plays one-dimensional, only adding fuel to the boring factor. It’s such a shame of wasted talent.

I’m sorry to say that although the cinematography, beautiful estate, and lavish wardrobes are stunning, the script lacks creativity and depth. It’s streaming now on Netflix. 2 and ½ stars out of 4.

Next up: “Going Attractions: The Definitive Story of the Movie Palace” 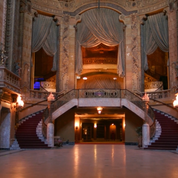 Writer, Director April Wright’s Documentary brings us a historical look at the extravagant movie palaces of the 1920s. Did you know that a movie palace during that time could seat 6,000 people?

The film is a celebration of a bygone age in which movie attendees dressed for the occasion. The grand palaces were meeting places for all to enjoy. Focusing on the concept that movie watching with large crowds is a unique experience, I do concur. My first movie theater experience still floods my memory with delight. At the age of seven, I attended a birthday party in Hollywood at Grumman’s Chinese Theater; I thought all movie theaters were as grand for many years after that.

I enjoyed Leonard Maltin’s retelling of the early days in the feature-length films as well as the variety of theater historians, owners, and workers from across the country. You will learn that Samuel “Roxy” Rothafel, he gave his nickname to a Times Square theater in New York and later helped develop Radio City Music Hall and Balaban & Katz. They built massive movie palaces in Chicago, of which I’m very familiar.

April Wright is on a spree with three historical docs that are well researched, excellently organized, and visually stunning. I’m way in 3 and ½ stars out of four—an outstanding historical film.

Thanks for listening in tonight; check out my reviews and interviews on https://www.sarahsbackstagepass.com