By Carl AmariNovember 28, 2016Nostalgia
No Comments 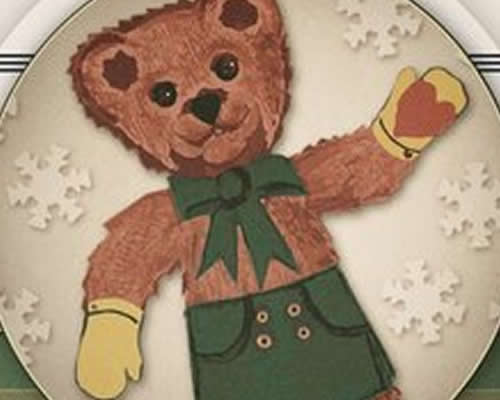 Hi everyone and Merry Christmas!  Welcome to my second Nostalgia Blog.  I will be posting a monthly blog so I hope you enjoy it!  In my opinion, one of the finest Christmas stories ever produced was “The Cinnamon Bear”.  It aired in syndication for many years beginning in 1937.  The first time I ever heard “The Cinnamon Bear” I was about 14 years old and I’ve been a big fan ever since.  For years, a poor sound quality of “The Cinnamon Bear” was being circulated.  Recently, I licensed this 26-episode audio series from the estate of the creator and we found the master 16 inch transcription discs.  We had the discs transcribed by a sound lab and digitally remastered them.  We now offer this amazing Christmas story for children of all ages in near high-fidelity sound quality. You can order the complete series this month via digital download for only $9.99, that’s 50% off or purchase it on CD.  Throughout the month of December on “Hollywood 360”, “The WGN Radio Theatre” and “Classic Radio Theatre” I’ll be presenting Christmas programs from all your favorite radio series including: Jack Benny, Suspense, Our Miss Brooks, Sherlock Holmes, Escape, The Great Gildersleeve and many more.

The Cinnamon Bear by Phil Borchmann and Carl Amari

Among the golden years of radio, 1937 was particularly notable. Debuts included Edgar Bergen, Charlie McCarthy and W.C. Fields on The Chase and Sanborn Hour, The Guiding Light soap opera on NBC, and a Christmastime serial that followed the adventures of a scrappy stuffed toy bear (come-to-life) and his two young human pals. The radio serial was called The Cinnamon Bear and it was designed to air from Thanksgiving day (5 days a week in 26 installments) ending on Christmas Day. The Cinnamon Bear still commands a loyal following thanks to its broadcasts and audio sales that continue today.

An idea is born

In April 1937, Glanville and Elisabeth Heisch welcomed their first child, Catherine. Glanville, a happy new dad, began creating a series of poems and verse for his daughter. (One was about a stuffed little bear with shoe-button eyes called The Cinnamon Bear, whom he had played with as a child.) It should be noted that at the time, Glanville was an accomplished writer and producer at KFI in Los Angeles.  Not long after Catherine’s birth, Glanville received a call from a friend, who worked at a major transcription company, saying he was looking for a kids’ Christmas serial that would feature 15-minute episodes to run through the holiday season. To keep listeners coming back, each installment had to close with a cliffhanger. Although Glanville admitted to his friend that he was not a writer of children’s material, he promised to give the idea some thought. He went home and began working on the project. Glanville, with the help of Elisabeth, completed the script along with the lyrics to seven songs in about six weeks. He sent an outline to his friend, who gave it the green light. Work on The Cinnamon Bear thus began.

The tale starts with twins Jimmy and Judy Barton rummaging in their attic for the Silver Star, an ornament that had topped off their Christmas trees for as far back as they could remember. During their search they encountered a four-inch-tall stuffed bear who squeaked to them that his name was Paddy O’ Cinnamon. He tells the children that the crafty Crazy Quilt Dragon purloined their Silver star. The trio vows to recapture the star, but first Paddy “degrows” the twins so they can fit through a tiny crack in the attic wall that leads to Maybeland and beyond, where Crazy Quilt had fled with their coveted ornament.

The adventure brings the candy and pastry-loving Paddy and twins Jimmy and Judy face-to-face with a panoply of funny, scary and whimsical characters. Among them are Fe Fo the giant, the Wintergreen Witch, Weary Willy the stork, the Roly-Poly Policeman, the Inkaboos, Santa Claus and the Silver Star thief himself, The Crazy Quilt Dragon. The repartee is delightful and the tunes are catchy. Equally enthralling are the locales where the trio travels, including the Root Beer Ocean, Lollypop Hill and the Icicle Forest.

The show was produced in about a week, thanks to an ensemble of some of the best radio talent of the era. Don Honrath wrote the music that was scored by orchestra leader Felix Mills and played by a small band.  The story was narrated by Bud Heistand, Elisabeth’s brother, whose announcing roles included The Burns and Allen Show and the Fabulous Dr. Tweedy and as a sportscaster for the Los Angeles Dodgers. The nearly three-dozen characters throughout the script were played by a group of radio pros including Slim Pickens (cowboy voice and movie actor also known for his roles in the films Dr. Strangelove and Blazing Saddles), Joseph Kearns (Mr. Wilson from TV’s Dennis the Menace), Howard McNear (Floyd the Barber on The Andy Griffith Show) and Gale Gordon (Mr. Mooney on The Lucy Show). 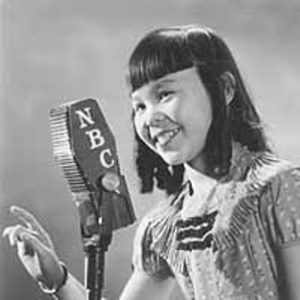 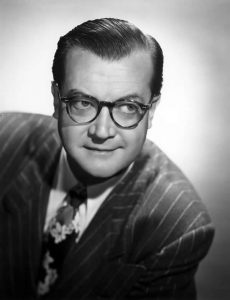 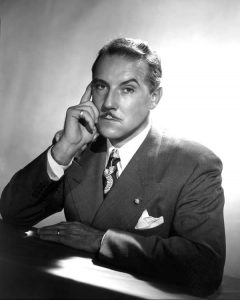 The Cinnamon Bear was a big hit, playing on hundreds of radio stations across the country. Over the years, the broadcasts dropped off, but the story lives on in markets such as Portland and Chicago, as well as in the hearts of many who have listened to it faithfully since its creation.

Here are three pictures of Glanville Heisch’s original hardbound radio script of The Cinnamon Bear.  It has his handwritten notes and tweaks to the script.  It’s one-of-a-kind and absolutely fascinating!  I have it on loan from Glanville’s granddaughter in order to have it professionally replicated so that we can soon offer it to the public.  The goal will be for people to listen to the audio and follow along with the script. 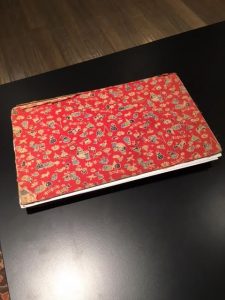 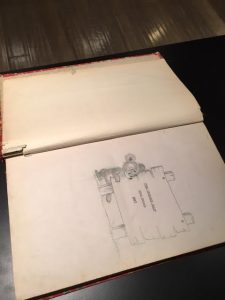 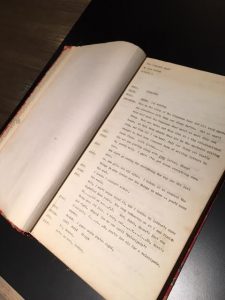 —Phil Borchmann is a journalist and magazine editor living in Southwest Florida and a grandson of Glanville and Elisabeth Heisch.