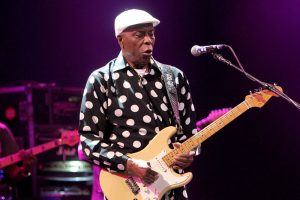 Hi Carl, and hello to all of our listeners out there; tonight, I’m going to review two films.

“The Torch” is a new documentary film based on the Chicago Blues legend Buddy Guy. At 85, Buddy Guy remains the leader for promoting the blues. He’s determined to pass the torch to the next generation; the film is about his mentorship of Quinn Sullivan, a blues playing prodigy, along with scenes of his childhood home of Lettsworth, Lousiana. The film also serves as a historical view of Guy’s life, work, and antidotes; it’s an important film as it also serves as a role model in mentorship.

Filmed in 2019, we are introduced to the musicians’ who influenced Guy, though many, Muddy Waters is his hero. He has survived his colleagues, including such stars as Howling Wolf, Muddy Waters, and John Lee Hooker. Writer/director Jim Farrell centers on Guy’s desire to see Blues carried on. Quinn Sullivan, a 23-year-old prodigy of electric Blues guitar, is Guy’s recipient as clearly, he’s taken him under his wing since he was 8-years old. We are privy to viewing Sullivan’s performances over the years through archival footage as he’s been recording, performing, and traveling with Buddy Guy since he was a pre-teen.

Having spoken with Buddy Guy several times in his Chicago club since 2001 and a fan of the blues, this outstanding documentary by director Jim Farrell provides information on his former life and his goal—to not let the blues die. Guy is easy to talk with, welcomes all, and loves to converse about the Blues. He’s played with all the greats, the Rolling Stones, Eric Clapton, and Carlos Santana. In addition, he’s mentored Derek Trucks, a former member of the Alman Brothers Band, and now with his own band, The Tedeschi Trucks Band, with his wife Blues singer/guitarist Susan Tedeschi. Both Trucks and Tedeschi appear in the film, speaking about the influence of Buddy Guy on their careers.

I appreciated the film is the footage of Guy playing in his club while walking around immersed in his adoring fans. A camera crew follows him as he walks, plays, and sings; having witnessed this many times, clearly Guy enjoys mingling with his fans. When he’s on stage, his performance is magnetic, he plays effortlessly, his movements, gestures, and eye contact is commanding; yes, he wears the crown of the Blues, although he is willing to share his talents. Whenever people are visiting Chicago for the first time, I always tell them to go to Buddy Guys Legend’s Club, as it’s an experience just to be in the club whether he’s playing or not; the talent he brings is always incredible.

I recall talking with Buddy Guy about Eric Clapton, as whenever he is in Chicago, he’d stop by the club and play with Guy told me, “Eric always wants me to play “Sweet Home Chicago,” as he really likes that song. The treat is seeing them play and sing it together, as I’ve witnessed at Eric Clapton’s Guitar Festival in 2007, at Toyota Park in Bridgeview, IL, just outside Chicago.

Farrell’s film not only gives us a history lesson of the Blues, but it also serves as a ‘love letter to the Blues’ and one significant musician, the eight-time Grammy winner Buddy Guy. 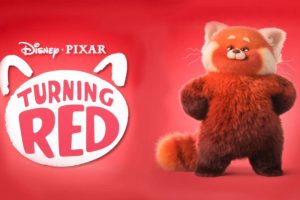 Next up, Pixar’s “Turning Red” It tells the story of a 13-year-old girl and the pressures of growing up. Her over-bearing mom, pushes too hard, and the stress becomes overwhelming, as a result, she turns into a giant red panda at times. Sure this tagline seems unrealistic, although under director Domee Shi’s energetic and empathic lens, she has shaped a film that, demonstrates the potential Pixar has to tell character-driven stories that have universal appeal.

Writers Shi and Julia Cho, weave a textured screenplay that captures the challenges of coming-of-age. Rosalie Chiang voices Mei Lee, a 13-year-old girl who has grown up to be the perfect, dutiful daughter. She pleases her mother voiced by Sandra Oh by working after school at her family’s temple. Discovering that her mind day-dreams of boybands, and boys at school, a normal occurrence that is verified by her girlfriends is not a topic that pleases her mother.

Life for Mei Lee changes quickly after being publicly embarrassed, as she wakes up the next day to discover she’s turned into a giant red panda. Unfortunately, excitement is the trigger for the panda change, and as a 13-year-old, excitement is an emotion that is not easily suppressed. Filmmakers do young girls first experience with their periods, an admirable move, the fears and worries are covered in a few scenarios.

The character driven story works, as the writers provide both sides of the issue; parenting and growing up. Mei Lee’ s mother has to learn to loosen the apron strings and Mei Lee learns to rely on her instincts. I enjoyed the movie as it gives kids and parents a vehicle for discussion and the message to believe in your heart.

I’m Sarah Knight Adamson, your national film and TV critic, be sure to check out my article on the Critic’s Choice Awards in Hollywood; it was exciting to meet so many stars.

I’ll see you next week, be sure to check out “The Torch” and “Turning Red.”