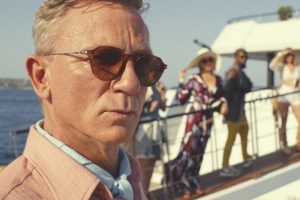 Hey everyone in radioland, I’ll attend the Toronto International Film Festival in Toronto, Canada, on September 8, 2022. This year I was able to choose 20 films to view, and I am narrowing my list down a bit.

I’ve very excited about the squeal to the famous movie “Knives Out,” which I saw in Toronto in 2019 when it made its world premiere. The new film is entitled “Glass Onion: A Knives Out Mystery.” Daniel Craig headlines a completely new cast that includes Ethan Hawke, Dave Bautista, Kathryn Hahn, Edward Norton, Kate Hudson, and Janelle Monae. While the 2022 TIFF premiere occurs in September, “Glass Onion: A Knives Out Mystery” will officially stream on Netflix on December 23. A limited theatrical release will be announced later this year.

Writer-director Rian Johnson told Empire Magazine that, unlike the first film, “Glass Onion: A Knives Out Mystery” will expand beyond covering wealth disparity.
“The movie itself is not entirely about the income divide, but that definitely has a huge place in it,” Johnson explained of the follow-up feature. “We’re in a historical moment where the divide feels increasingly obscene. Like a circus that we can’t keep our eyes off even as the negative effects of it become more and more real in all our lives.”
This film critic is excited to view scenes that were filmed in Greece this past June, as filming a major Hollywood film in Greece is a rare occurrence.
Zac Efron stars in a true story of a guy who needs to do something about the Vietnam War. He decides a way to help is to go to the Vietnam War to deliver his neighbor, a soldier, cold beer. The film: “The Greatest Beer Run Ever” opens on September 30 in theaters. The biographical action-comedy film is co-written and directed by Peter Farrelly and based on the book of the same name by Joanna Molloy and John “Chickie” Donohue. The film also stars Russell Crowe and Bill Murray.

I’m a fan of mixing historical facts with comedy and this film appears to be a winner. Themes of friendship, loyalty, and war, are brought out in the film. Farrelly also met with the “Chickie” Donahue and gained insight into his experience, his goal for the film is to create an accurate snapshot of 1967, in Vietnam including all sides of the war. 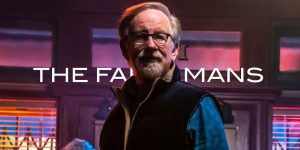 “The Fablemans” director/co-writer Steven Spielberg’s new film is loosely based on his childhood growing up in post-World War II era Arizona. Sammy Fabelman (young Spielberg, played by Gabe LaBelle) discovers a devastating family secret. Thus begins a journey to become a filmmaker, as he realizes that studying films aids in finding the answers to his dilemma.

Starring Michelle Williams, Paul Dano, Seth Rogen, Jeannie Berlin, Judd Hirsch
and Julia Butters. The film will open at the Toronto International Film Festival; at this writing, not much is known about it other than a few quotes from cast and crew members. “West Side Story” cinematographer Janusz Kaminski told Deadline earlier this year that he and Spielberg “cried often” while making “The Fabelmans.”

“What’s special about ‘The Fabelmans’ is that he’s able to, as a filmmaker and an artist…be very honest about his background, very honest about his family, not sugarcoating this stuff and revealing part of himself that nobody really knows about,” Kaminski explained. “So, that’s the most courageous thing I found about making this movie, and it’s very emotional.”
Actor Dano shared with the Hollywood Reporter that playing a version of Spielberg’s father made “the stakes feel really high” on set.

“You’re embodying one of the most important, influential, complicated figures in Spielberg’s life,” Dano explained. “It was incredible to see how much of this was in his work the whole time. He’s sharing a piece of himself that I find very moving. There’s a real gift in it when somebody of that stature and at that level of artistry is willing to do that.”
Yes, I’m really looking forward to this film as I have been a huge Spielberg fan and a champion my entire life; yep…we go back to 1974, “Sugarland Express.”
A comedy film I’m really looking forward to screening in Toronto is “Weird: The Al Yankovic Story” starring Danielle Radcliffe of Harry Potter fame stars as Weird Al. Truth be told, I’m a Weird Al fan and have seen his concerts in person. He’s creative, talented and an awesome entertainer, and casting Danielle Radcliffe appears to be spot-on.

I’ll be interested to see the Madonna scenes as those will be eye-opening; I’m not sure if they had a relationship or not, although the film’s trailer insinuates they did. Or does it? Perhaps the film is a spoof on the straight and narrow Yankovic’s life as I’ve come to know him. Daniel Radcliffe in costume as “Weird Al” Yankovic is simple, Hawaiian shirt, big curly hair, and an accordion.

Writer-director Eric Appel’s 2010 viral video dared to tease the “true” account of” Weird Al” Yankovic’s sudden rise from an accordion player who replaced the lyrics of popular songs with funny new ones. Weird: The Al Yankovic Story is a tell-all about the comedy and music legend, as well as a side-splitting skewing of all the music biopics that preceded it. Hit songs “My Bologna,” “Beat It,” and “Like a Surgeon” are among my favorites, and I’ll be on the lookout for those in the film. Rainn Wilson plays Yankovic’s mentor Dr. Demento, and Evan Rachel Wood is Madonna, whose sordid love affair may have struck dangerous chords, though he’s known for his fame, wealth, and creativity.

The film is co-written and produced by Yankovic, so I’m expecting to laugh and have a popcorn-crunching great time.
Check out my Toronto Film Festival coverage on Sarah’s Backstage Pass. Thanks for listening in tonight; this is Sarah Knight Adamson, your National film and TV critic for Hollywood 360 Radio Network. And I’ll see you next week.