Unhinged, Words on the Bathroom Walls, and The One and Only Ivan Podcast 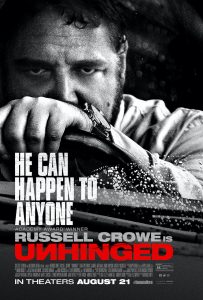 Hi Carl, hey, I have some good news. The movie theaters are now open! Tonight, I will discuss two films playing in theaters and a Disney movie that you can stream at home.

First up, Russell Crowe’s new movie, “Unhinged,” is rated R and is playing in theaters and Drive In’s, and it came in first place opening weekend with 4 million dollars.

Russell Crowe (The Man) stars in a psychological road rage film that quickly turns into a horror film. Rachel, played by New Zealand actress, Caren Pistorius, a single mom, runs late to work when she ‘lies on the horn’ at a traffic light at “The Man.” Turns out to be a deadly idea as he quickly hunts her down and lets her know he doesn’t care about her excuse of having a bad day, he threatens to show her a “really bad day.” A game of cat and mouse ensues, with deadly outcomes. The premise—you never know when provoking a stranger if they are on the edge of becoming unhinged.

Here’s part of my interview with director Dereck Borte, on Russel Crowe’s challenging scenes.
Dereck responded: “I don’t think any of them were difficult for him. I think that he’s amazingly talented and experienced and just kind of goes about it in a workman way. And, I think that each scene brought with it different challenges. I mean, acting while driving a vehicle at those kinds of speeds, that to me, has got to be difficult. Actual driving and making sure that you’re being as safe as you can, but still staying in character, that’s a difficult thing, I’m sure. And, I think that each scene, as I said, brings its own challenges and yet, because he comes to work every day and gets everyone on the crew, including myself to raise their game up, to try to be the same universe as his.”

The Bottomline: Two and a half stars out of four. The movie turns into a ‘violent, slasher horror film very quickly. Crowe is terrifying as “The Man.” I’d recommend the film if you are a horror fan; otherwise, I’d steer clear.

Check out my full interview with Dereck Borte for “Unhinged.” Click here:

“Words on the Bathroom Walls” 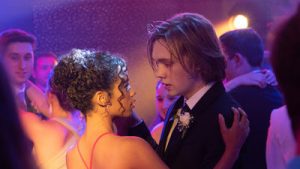 “Words on the Bathroom Walls” rated PG-13, came in 3rd place at the Box Office. Here’s a look into a High School teen’s struggles with ‘Schizophrenia,’ and all the heartache of the disease. The film stars Charlie Plummer, Taylor Russel and Andy Garcia.

The Bottomline: I’m in, three stars out of four. An excellent film on all fronts. Great script, tremendous acting and a realistic look at mental health. 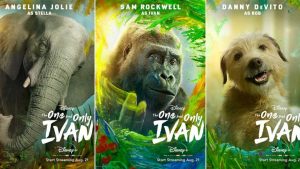 “The One and Only Ivan”

Disney + is streaming “The One and Only Ivan”

Ivan, a silver back gorilla lives in a cage at a mall. Sam Rockwell, is the voice of Ivan, the ringmaster is Brian Cranston. Voice actors include:

This is a great family film. Walt Disney Records has released the digital original soundtrack to Disney’s new movie “The One and Only Ivan,” streaming exclusively on Disney+. Directed by Thea Sharrock (“Me Before You”), the movie and soundtrack feature an original score by composer Craig Armstrong and the original end-credit song, “Free” written by Diane Warren and performed by Charlie Puth.  The digital soundtrack is available now.

The original song “Free” written by iconic songwriter Diane Warren, sets the tone and intended message of the film. She has said, “The theme of this movie deeply touched my heart and I hope my song deeply touches yours as well. Charlie Puth brought this song to life in a way nobody else could. It is a very special and meaningful song to me, and I hope it becomes one for you as well. I hope it makes you feel a little more free.” I believe her wish has come true as the beautiful, touching song emphasizes the importance of animals truly living free. Singer, Charlie Puth is only 28 years old, his voice resonates as we view this heartwarming fantasy story.

Thanks for listening in tonight and check out my full interview with Dereck Borte for “Unhinged” on Sarah’s Backstage Pass.com

See you next week.