We Can Be Heroes and Wonder Woman 1984 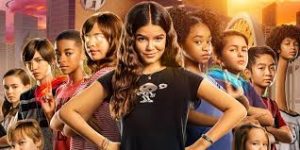 Hi Carl and Happy New Year to all of our Hollywood 360 listeners out there. Here’s a movie that is streaming now on Netflix, “We Can Be Heroes” It is written and directed by the talented Robert Rodriguez, who has marked his place among family superheroes films with his signature “Spy Kids,” bringing four to date. “We Can Be Heroes” is the sequel to “The Adventures of Sharkboy and Lavagirl” which was released in (2005). The film stars, Priyanka Chopra, one of Bollywood’s most prominent actresses,

Haley Reinhart, Pedro Pascal, of the Mandalorian series and Christian Slater. During an alien invasion all of earth’s superheroes are abducted, leaving their children, (including Sharkboy and Lavagirl’s daughter “Guppy”) to save their parents and defend the world.

Clip: As the children of superheroes you are all in danger.  My mommy is Lavagirl and my daddy is Sharkboy. Our heroes have been captured by alien intruders.

Expanding the back-story, we meet Miracle Guy Boyd Holbrook, a Superman inspired character, and other grown-up heroes that battle tentacled aliens who try and take over the world. Marcus Moreno Pedro Pascal has made a promise to his daughter Missy, YaYa Gosselin, that he will retire from his superhero job and not fight. Will he fight to save the world? Do the superhero kids end up helping? These questions and more are answered in the one hour forty-minute runtime.

I’m all in 3 stars out of 4, the movie is great family fun for all, with dazzling special effects and non-stop action. The superheros kids do work together to fight the aliens as humor is sprinkled in the narrative. The back-and-forth banter between the kids feels ‘on the nose’ as we are privy to their inner thoughts. The addition of a hero in a wheel-chair, Andy Walken, who plays ‘Wheels,’ is an excellent more as it shows kids that your brain power can be just as important as your physical abilities.

“Wonder Woman 1984” stars Gal Gadot and is the sequel to “Wonder Woman” (2017). The film’s beginning depicts Diana Prince (Gal Gadot) reminiscing about her childhood as a younger version of herself, portrayed by Lilly Aspell—we see her as a child learning from her mentors. These scenes set the film’s underlying tone by enlightening us to Diana’s upbringing and her mentors, leading her to achieve success within the parameters of being true to herself and others.

Diana Prince is living her life in Washington, D.C., over 60 years after the events of the original “Wonder Woman” (2017). She’s an anthropologist at one of the Smithsonian buildings; she also saves lives under her superhero alias, which is carried out in a low-key manner. During a robbery, a Latin-inscribed stone is found, and with the help of her colleague Barbara Minerva (Kristen Wiig), they discover that this “Dreamstone” grants one wish to any person who asks—but at a cost. The rock entices the villain in the story Maxwell Lord (Pedro Pascal). In a somewhat ridiculous plan, he turns himself into the Dreamstone and begins wreaking havoc.

Clip: Nothing good is born from lies, and greatness is not what you think.

I’m all in 3 and ½ stars out of 4; “Wonder Woman 1984” is exactly the film we need to teach young girls throughout to world that they can be superheroes by doing their best in helping others.

Writer and director Patty Jenkins is on target in bringing us a stunningly beautiful film where dreams can come true. Steve Trevor (Chris Pine) Diana’s love interest is brought back, and their reunion is visual, dreamy eye-candy for all.

Patty Jenkins ’80s neon color palette brings the set design alive, while I also enjoyed Kristen Wig’s Cheetah transformation. Even though the two rivals fought tooth and nail, I can only imagine the fun they had between takes. And that’s what this film is all about, having fun while sitting back, munching your popcorn, and being entertained. However, I did feel that the running time was too long.