West Side Story and The King’s Man 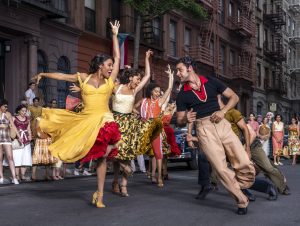 Tonight, I’m going to review the film “West Side Story” it’s rated PG-13 and is the remake of the 1961 movie. Steven Spielberg directs with Tony Kushner as a screenwriter; I recently watched the 1961 film and couldn’t help but focus on Rita Moreno as she has a big part in the 2021 film. I’d also like to tell you that I have conducted a Q&A with Rita after a screening of “West Side Story” along with Russ Tamblyn (Riff) and George Chakiris (Bernardo), former stars of the cast. 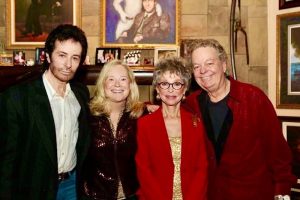 The great news is that the updated “West Side Story” is as magnificent and in some ways better than its predecessor. Stephan Spielberg’s seasoned direction brings magnified camera angles that enhance the fast-paced choreographed dance numbers while illuminating the emotions of the actor’s nuanced vocal melodies. The closeups draw us into the characters’ storyline, individualities, and intentions. This technique raises the bar, as the songs and dramatizations heighten the viewing experience and deepen our understanding of the plot.

Speaking of plot, two gangs, one white, (Sharks) and the other new immigrants, from Puerto Rico, (Jets) similar in theme to Shakespeare’s “Romeo and Juliet,” that draws a line a forbidding the two to intermingle— a line that may lead to death. Tony, (Ansel Elgort), founder of the Jets, has been released from prison; he no longer chooses to associate with the Jets. He meets a newly arrived to America girl, a Puerto Rican, the sister, Maria (Rachel Zegler, sister of the Sharks’ leader Benardo, (David Alvarez). Despite the loud vocal warnings, the two fall in love, yet as in “Romeo and Juliet,” there is no happy ending.

Other significant changes in the casting of Maria; back in the 60s, movies were cast with known box-office stars to draw in a crowd, Nathalie Wood was a popular star, yet she was white, the role of Maria, in today’s casting would typically go to a Latino/Latina actress, and that is the case here. Wood’s voice was dubbed as she wasn’t a singer, here Zegler’s vocals are beautifully highlighted. As a side note, Rene Zellweger did not sing Judy Garland’s songs; she was dubbed in “Judy.” In that case, the iconic singer’s voice is the focal point of the film, in “West Side Story,” the story is the key. One should also know that lip-synching is not an easy task, and in most cases, more difficult.

When analyzing the violence, the 2021 film is rated PG-13 for violence—blood is shed, creating dreadful anticipation for the rumble scene between the two gangs. To actually experience the two gangs fighting over race feels depressing and senseless, even more so today as we are subjected to racial violence in America in our daily news.

As for Rita Moreno’s new role as the is that of a drugstore owner Valentina, a role similar to the Doc character from the original, she’s warm but with a tantalizing sense of humor. She’s also wise and advises her community.

The Bottomline, the remake is tremendous, the choreography is on target, the drama has more depth, the cinematography during the vocal numbers resonates with viewers film in ways the original was lacking, and the depiction of violence creates higher stakes. I’d be remiss, not to mention the overall energy and look of the film— the vibrant colors pop against the gritty muted black and white graffitied wall and street set design.

I’m wondering if could Rita Moreno could win another Academy Award? I sure hope she’s nominated. 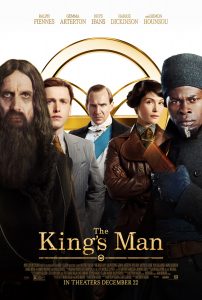 Next up “The King’s Man.” It stars Ralph Fiennes (Orlando) and is a prequel to “The Kingsman” films. The beginning of the London secret service group known as the Kingsman is explored. The director and co-writer are Matthew Vaughn. Fiennes, who also executive produced, plays a British aristocrat and the Duke of Oxford. When he and Emily, his wife, and their young son Conrad visit a Red Cross aid camp in South Africa during the Boer War, she is killed by a sniper attack. The Duke of Oxford returns to England with one mission: to protect his son Conrad.

Orlando, a sworn pacifist, is determined that the world needs help to stop these types of conflicts before they occur. Twelve years later, Orlando recruits two of his servants, Shola (Djimon Hounsou) and Polly (Gemma Arteton), into his spy network dedicated to protecting the United Kingdom and the British Empire from WWI. Conrad, eager to fight, is forbidden to join up by the over-protective Orlando, who speaks with the leader of the British war effort to ensure Conrad cannot enlist. Orlando and Conrad also meet Captain Morton (Matthew Goode) and World War I-era British Army officer Herbert Kitchener (Charles Dance).

The major villian’s are Rasputin (Rhys Ifans) and Erik Jan Hanussen (Daniel Bruhl). Subtlety in most scenes are rare; while whiplash is evident, the transitions are sudden and unexpected. The toggling back and forth between and war drama and absurdity plagues the film as a ‘tonal mess. What does become clear is the set-up for the next installment with an even better cast namely Taron Edgerton, who is sorely missed in this film.

The Bottomline: I’m out two stars out of four; the script lacks the humor of the first two films and frankly is missing the actor Taron Edgerton. You may enjoy the action scenes, but those don’t carry the entire film.

Thanks so much for listening in tonight. This is your National Film and TV critic Sarah Knight Adamson for Sarah’s Backstage Pass.