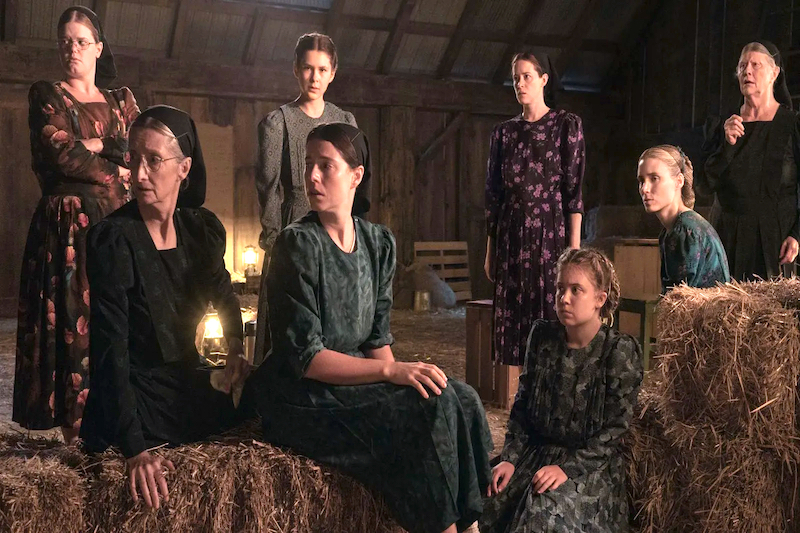 Oscar nominated screenwriter Sarah Polley serves as screenplay writer and director of a horrific story based on true events in a Mennonite community in Bolivia. Polley adapted the film set in 2010 from the best-selling novel “Women Talking” by Miriam Toews. The actual shocking events involved 151 women and girls in the Manitoba Colony—both women, girls, and sometimes their male husbands were drugged with an anesthetic spray used to sedate cattle. The men would then sexually assault the women; girls ages 5 to 65, at night from 2005 to 2009. Sarah Polley’s film is a master class in filmmaking; the outstanding cast, Rooney Mara (Ona Friessen), Jessie Buckley (Mariche Loewen), Frances McDormand (Scarface Janz), Judith Ivey (Agata), Sheila McCarthy (Greta) and Ben Whishaw (August) all give riveting performances.

In several interviews, Polley stated that she wasn’t interested in showing the violence. Instead, she tells the story through the women and the decision they need to make in 48 hours while the men are away posting bail for the attackers.

Their path is explained via a voice over. “We were given two days to forgive the attackers before they returned. We hardly knew how to read or write. But that day, we learned how to vote.” A small group of women retreat to a hayloft to have a debate and vote for the first time in their lives.

The illiterate women are joined by school teacher August, who takes notes for their historic meeting. The women determine that they have only three choices. They can do nothing, stay and fight, or they can leave. Salome does not hold back her anger during their discussion. She screams in frustration, “We know that we have not imagined these attacks!” “We know that we are bruised and terrified, infected and pregnant, and some of us are dead! We know that we must protect our children. I will become a murderer if I stay.”

A big hurdle is a fact that the women have been raised as pacifists; their religion guides them; therefore, forgiveness is part of their path to justice.

Ona, pregnant from rape, serves somewhat as the group’s inner conscience. She softly shares that even though her attacker impregnated her, she does not consider him a monster. She will love her unborn child and see the compassion and guiltlessness in her offender and future generations. “Surely, there must be something worth living for in this life, not only the next.” Ona ponders. “We cannot forgive because we are forced to. We are not all murderers. Why does love, the absence of love, the need for love result in so much violence?”

“It is a part of our faith to forgive. We have always forgiven those who have wronged us. Why not now? If we do not forgive these men, we will be excommunicated and forced to leave the colony in disgrace. And if we are excommunicated, we forfeit our place in heaven. It’s crucial to establish that we forgive the men so we can enter heaven’s gates.”

Ona does not see the males of their commune as criminals who deserve to be punished. This community does not have a criminal justice system. Her position shows that despite her current situation being with child as the result of a sexual assault that all life is precious. Her only option based on her faith is to give birth and love the child of her abuser.

The discussion continues as the women try to figure out if there is any way to change the patriarchy (male leaders) and improve their future. They discuss the fact that men have taught the lesson of power to the boys, although at what age do we think the boys will begin to disrespect the girls? Another challenging topic is at what age do we leave our sons behind with the men, at age 13 or 14?

The sepia tones of the film reflect the drab conditions of the women. Hildur Guðnadóttir, the composer’s musical soundtrack, evokes a doomsday and a call to prayer with haunting acoustics.

“Women Talking” addresses domestic violence, the power of working together, and the PTSD symptoms that are caused by abuse. At times there is laughter, a nice reprieve from the heavy drama as we see the women gain feelings of comradery during their sessions. We also see changes in the women’s demeanors and their loving actions as they hug or quietly pull back a whisper of hair from the face of a woman telling her story. They feel each other’s pain and need to protect themselves and their children. 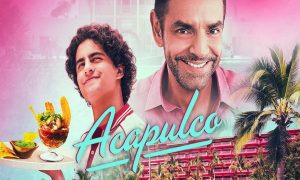 “Acapulco” is a family-centered, fun, good-hearted TV series that takes place in 1984, the 80s music and wardrobe add to the fun of the series. Telling the story of twenty-something Máximo Gallardo (Enrique Arrizon), whose dream comes true when he gets the job of a lifetime as a cabana boy at the best resort in Acapulco. He soon realizes the job is far more complicated than he ever imagined and in order to succeed, he must learn to navigate a demanding clientele, a mercurial mentor, and a complicated home life, without losing his way to shortcuts or temptations.

It’s streaming now on Apple TV+ and has two seasons.

I really enjoy this series as it’s very funny, and will take you away to a beautiful setting with a variety of characters.  3 ½ stars out of 4